The first phase of work on the former hunting lodge began in the winter of 1742/43 and eventually culminated in a huge rebuilding project that turned it into a stately residence which from 1745 was occupied every summer by the imperial family. Changing circumstances and constant interventions by Maria Theresa meant that the work continued into the 1760s. The final project commissioned by the empress was the redesigning of the gardens in the 1770s.

The first construction phase from 1743 to 1749 was carried out in close collaboration with Nikolaus Pacassi, whose practical skills led to him taking a leading role in the project, and eventually to his appointment as court architect in 1749.

Work commenced on the imperial apartments in the East Wing with audience rooms and residential suites for Maria Theresa and Franz Stephan, which were ready for occupation by 1746. The coronation of Franz Stephan of Lorraine as Roman-German Emperor in Frankfurt in October 1745 probably provided additional impetus to appoint what had become the imperial summer residence with particular magnificence.

One year previously, in 1745, the newly-refurbished court chapel had been consecrated. In terms of its spatial structure and proportions it remained largely unaltered from Fischer von Erlach’s design. The rebuilding of the east wing included the laying out of the two inner quadrangles and the construction of the so-called Chapel Staircase which afforded access to the piano nobile and the imperial apartments in this wing.

The following phase in 1746 included the removal of the central exterior flight of stairs that Fischer had built on the Parade Court front in order to create a spacious carriageway out of the ground floor of the central projection together with the Great and Small Galleries above it on the piano nobile.

During the same phase the Blue Staircase was constructed in the west wing out of the former dining room designed by Fischer von Erlach in order to provide a suitably imposing entrance to the piano nobile. The original ceiling frescoes by Sebastiano Ricci from 1702/03 were, however, retained.

The steady growth of the imperial family made new alterations in the east wing necessary by 1747, a new mezzanine floor being inserted between the piano nobile and the upper storey to serve as the apartments for the imperial children and their retinues.

The two galleries at the centre of the palace provided space for large-scale festivities, with the Small Gallery being used for lesser family celebrations. At this stage the two rooms were as yet unadorned with the rich stucco decoration and the ceiling frescoes that were later to grace them. On private occasions, the Great Gallery could also be accessed directly via the sweeping flights of the newly-constructed Parade Court Stairway. On official occasions visitors had to take the long way round from the Blue Staircase to the audience chambers of the emperor and empress in the east wing, in order to comply with court ceremonial.

Other alterations at this time included the arcades connecting the side wings – known as the ‘Cavalier Wings’ – along the Parade Court which housed the higher-ranking court servants. Adjacent to these and extending both eastwards (including the Orangery) and westwards a complex of working quarters was constructed. These were urgently needed, as Schönbrunn had now become an imperial residence, and including the imperial family and the court, more than 1,000 people had to be provided for and accommodated. At Maria Theresa’s express wish a theatre was also built in the north Parade Court wing and ceremonially opened in 1747. Among the singers and actors who trod its boards were the numerous children of the empress. She also distinguished herself here as a talented singer in her youth. 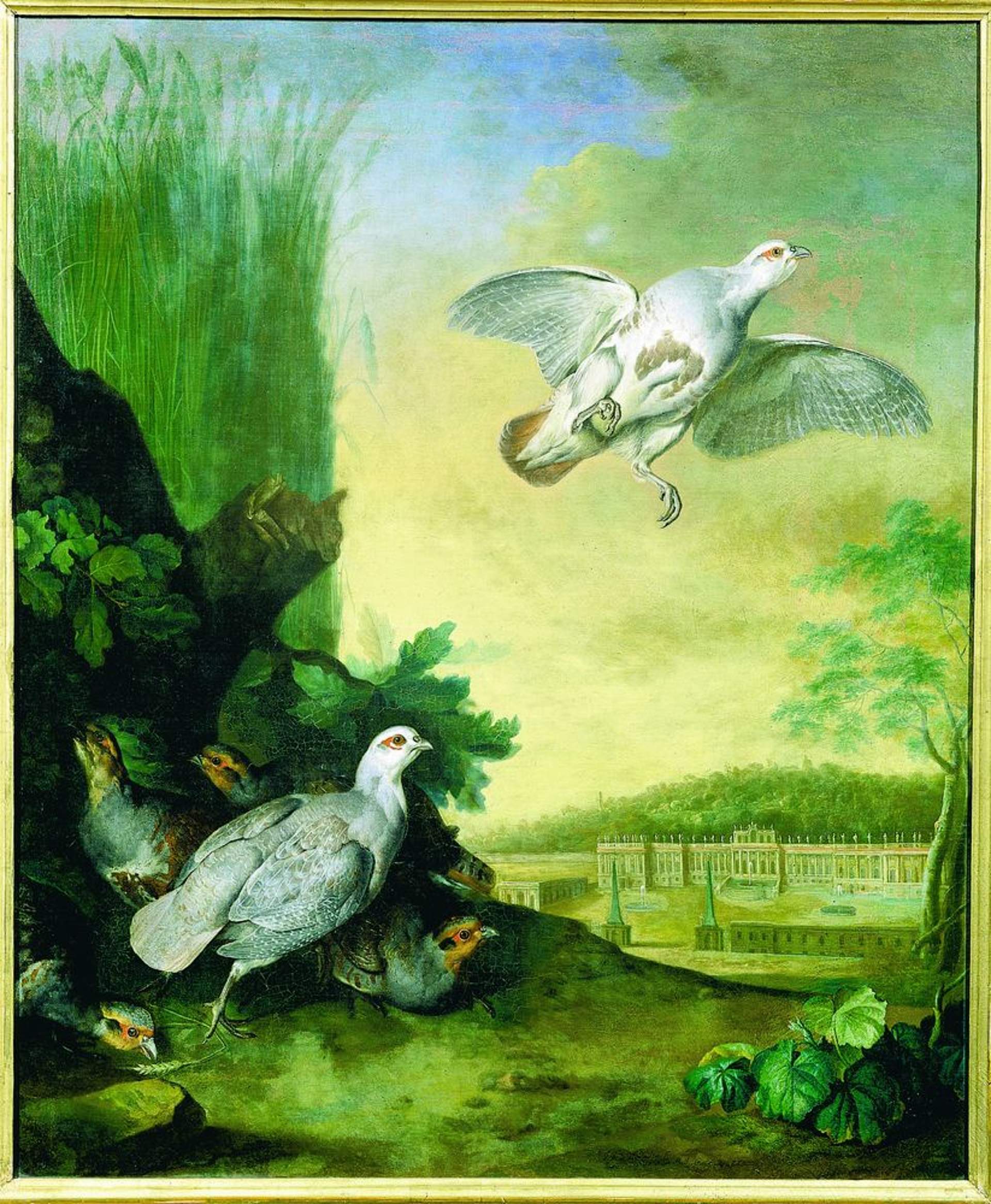 Soon after 1750 Maria Theresa again felt compelled to embark on a new phase of rebuilding, the planning and execution of which from 1753 to 1763 lay entirely in the hands of Pacassi. The imperial family was steadily growing, and the corresponding need for more room led to the insertion of a mezzanine floor in the west wing. This meant that the external symmetry of the building had been restored and that the completion of the façade could now be taken in hand. The paintings of Schönbrunn palace by Bernardo Bellotto dating from 1759/60 show the Parade Court and garden façades with their detailed articulation and rich ornamentation, marking the former exterior of the palace as an important example of the Rococo style.

The building work of this second phase from 1753 to the mid-1760s was not limited to creating more room in the upper storeys and the outbuildings of the palace but also included the decoration of the ceremonial and state rooms. The Great Gallery was given a vaulted ceiling to harmonize with the Small Gallery which had been vaulted and given a stucco marble finish in the first phase of building. The original glazed doors between the two spaces were removed to create a unified space with frescoed ceilings and magnificent stucco-work decoration, resulting in one of the most important Rococo interiors ever created. The frescoes were executed by Gregorio Guglielmi between 1755 and 1761, while the stucco decoration was created by Albert Bolla in 1761/62. Most of the rooms on the garden side of the palace were also given typical Rococo decoration displaying exuberant, playful forms known as rocaille, with mirrors and paintings set into the walls.
Especially notable are the largely private rooms on the piano nobile, which in addition to their luxurious appointment also attest to Maria Theresa’s love of East Asian art – porcelain, lacquer and silks – and for chinoiserie or European imitations of these artefacts.
Thus during the course of the refurbishing of the Great and Small Galleries the two adjoining Chinese Cabinets (1754–1759) were created, as were the Porcelain Room and the so-called Millions Room (1763–1765).

Following the sudden death of Emperor Franz Stephan in 1765, which was a devastating blow to Maria Theresa, a new phase of refurbishment and alterations ensued.

The widowed empress had her husband’s study in the East Wing of the palace appointed as a memorial room and spared no expense in fitting it out with precious Chinese lacquer panels, costly wooden panelling into which paintings by renowned artists were set, and magnificent furniture, creating a remarkable ensemble that has been preserved to this day.

Between 1769 and 1777, Maria Theresa had three suites of several rooms each on the ground floor painted with landscape murals by the Bohemian artist Johann Wenzel Bergl. She reserved for her own use a private set of rooms facing the gardens, as she found it too hot on the piano nobile during the height of summer, and because she no longer wanted to use the bedroom she had shared with her late husband. The other two apartments decorated with Bergl’s murals were assigned to two of her children – Maria Elisabeth and Maximilian Franz – who at that time were unmarried and thus still resided at court. Known as the Bergl Rooms, these apartments are notable for their largely exotic landscape murals that cover the walls and vaulted ceilings and represent unique examples of illusionistic painting.

The last project initiated by the empress during the 1770s was the designing and laying out of the gardens under the supervision of court architect Johann Ferdinand Hetzendorf von Hohenberg, who constructed architectural features in the park such as the Gloriette, the Neptune Fountain, the Roman Ruin and the Obelisk Fountain. In addition the avenues, fountains and open spaces were enhanced with statues and sculptures in the antique style executed by Wilhelm Beyer and his studio. The remodelling of the palace and gardens was not finally completed until just before Maria Theresa’s death in 1780.

As Maria Theresa had already feared in a letter to her daughter Marie Antoinette, her son, Emperor Joseph II, showed little interest in the summer palace at Schönbrunn, merely giving instructions that ‘everything in Schönbrunn should be left in its present state.’ He commissioned the necessary maintenance work, including replacing the flat roofs of  the Cavalier Wings on either side of the Parade Court with hipped roofs in order to prevent damage from the elements.