Following the death of Maria Theresa in 1780 the palace at Schönbrunn was not used again until the reign of Emperor Franz II (I) in the early nineteenth century. When preparations for the Congress of Vienna in 1814/15 were being made it became clear that Schönbrunn urgently needed renovating and refurbishing to bring it up to date. The renovation of the façade concluded the work and under the supervision of court architect Johann Aman the palace was given the characteristic appearance it still retains today.

Following Maria Theresa’s death in 1780, Schönbrunn Palace remained unoccupied and its use as a summer residence was only resumed during the reign of Emperor Franz II (I). In the intervening period Schönbrunn was occupied twice, in 1805 and 1809, by Napoleon, during which the French emperor used the memorial rooms to Franz Stephan in the East Wing as his quarters. In the run-up to the Congress of Vienna in 1814/15 it had become clear that the palace at Schönbrunn urgently needed restoring and that the apartments of the imperial family would have to be refurbished in order to bring them into line with current fashions. During the course of these improvements Emperor Franz had the façade altered between 1817 and 1819 to designs by the court architect Johann Aman which considerably changed its appearance. Aman removed Pacassi’s elaborate Rococo decoration from the façade, reducing it to much plainer forms with only a small number of decorative elements, giving the palace the appearance it retains to this day.

According to recent research, the painting of the whole palatial complex in the ‘Schönbrunn Yellow’ that characterizes the palace today does not date to the period of refurbishment in the early nineteenth century as had hitherto been assumed but became the established colour scheme from the middle of the century, using two different shades of yellow and yellowish-ochre for the flat surfaces and the architectural elements respectively.

to the palace and to architectural scholars. The results of the most recent samples taken from the rendering of the façade reveal that the former hunting lodge designed by the Baroque architect Johann Bernhard Fischer von Erlach was painted in light shades of orange and brick-red for the blank surfaces with the architectural articulation picked out in white.

During the reign of Maria Theresa the palace was initially painted in a golden ochre colour and then in the 1770s in a light ochre with the articulation picked out in white and light beige. Johann Aman, the court architect during the first half of the nineteenth century, used a monochrome grey colour in imitation of stone for the façade he had altered to conform to the Neoclassical canon.

From the middle of the nineteenth century the shade known as Schönbrunn Yellow began to prevail, possibly as a deliberate reference to the era of Maria Theresa.

In 1830 Franz Joseph was born in the east wing of the palace, in the apartments occupied by his parents, Franz Karl and Sophie. Schooled by his mother from infancy for his future role as emperor, Franz Joseph spent the summers of his childhood and youth at Schönbrunn. When he succeeded to the throne in 1848 the palace was once again to experience a brilliant epoch as he chose Schönbrunn as his favourite residence and was to spend the major part of his life there. At the beginning of his reign Franz Joseph moved into apartments in the west wing facing the Parade Court which he was to continue to occupy until his death on 21st November 1916. 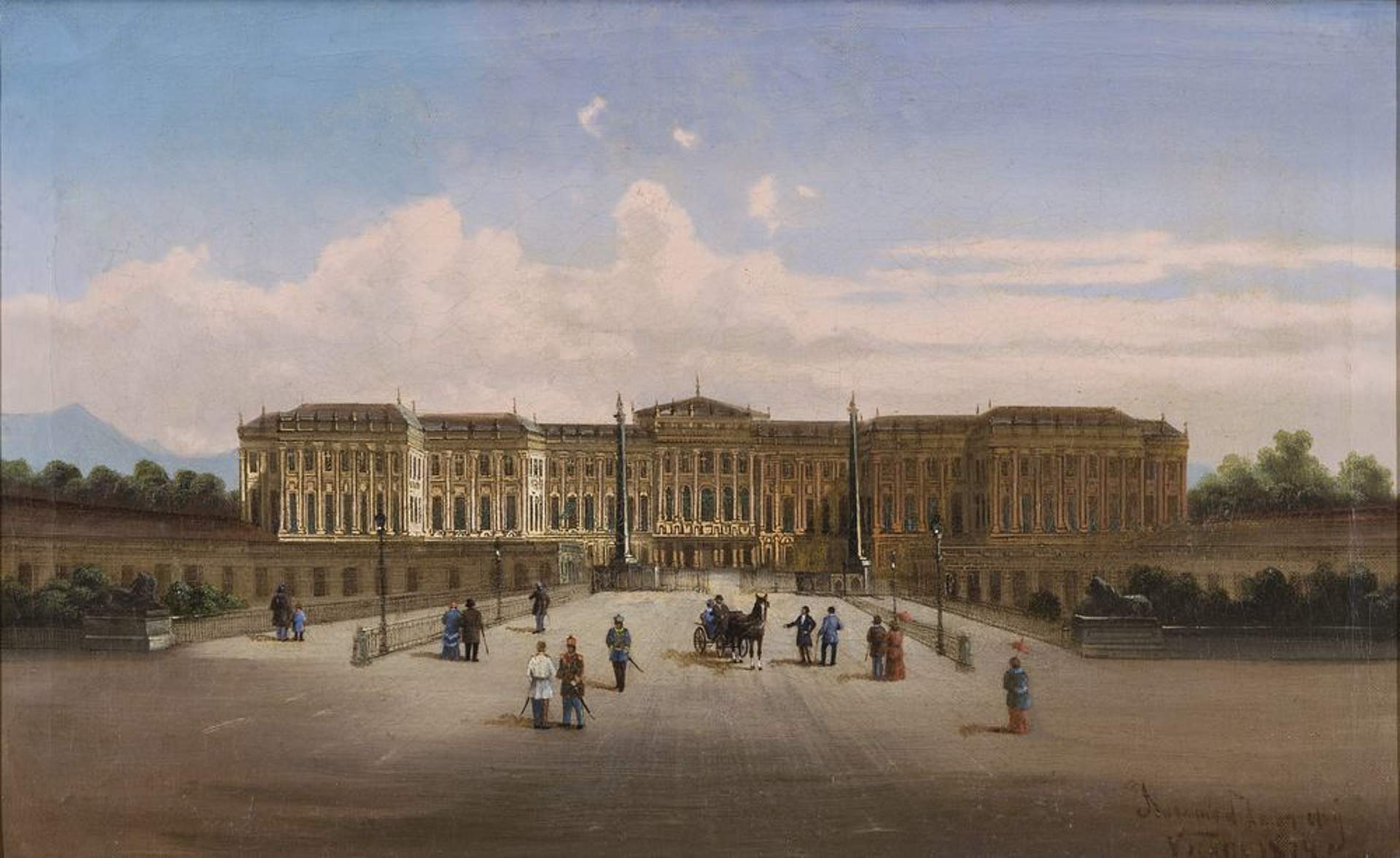 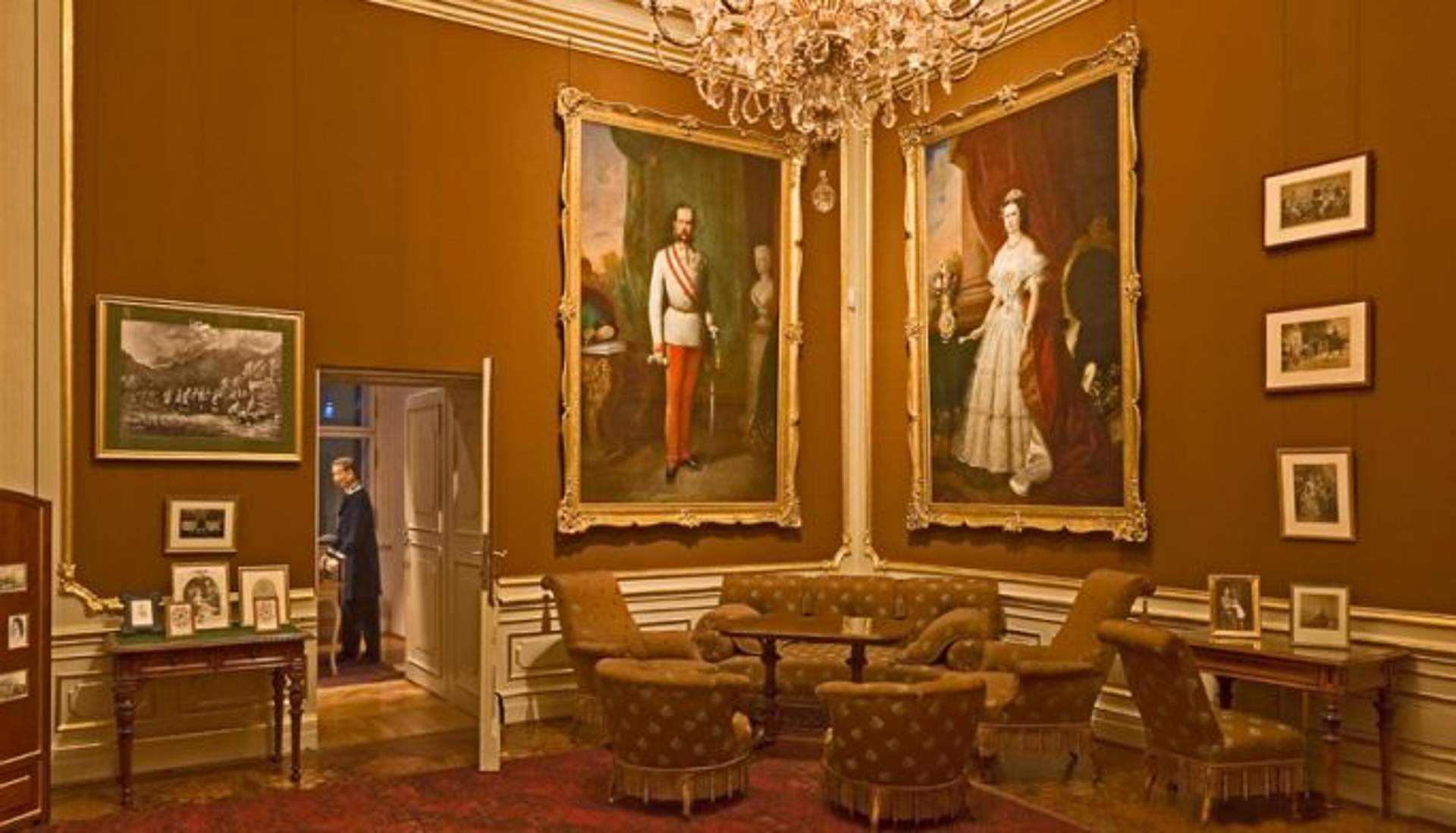 His apartments were a suite of communicating rooms comprising an audience chamber, a study and a bedroom. In the audience chamber the precious walnut panelling dating from Maria Theresa’s reign was retained and Franz Joseph continued to use the furniture made for his predecessor and uncle, Emperor Ferdinand I of Austria. The emperor’s private rooms were redecorated and refurnished during the 1860s.

In preparation for his impending marriage to Elisabeth, Duchess in Bavaria, in 1854, work began on adapting apartments for the future empress in the West Wing facing the Hietzing privy garden. Elisabeth’s apartments also consisted of several rooms centred on the empress’s salon in which she received her personal visitors. The adjacent rooms to the north such as the marital bedroom, the dressing room and the Staircase Cabinet served Elisabeth as private rooms and were furnished with heavy rosewood furniture. The so-called Staircase Cabinet was her study. In 1863 a spiral staircase was built into this room giving direct access to the rooms below on the ground floor. It was removed after the fall of the monarchy.

The rooms lying below her apartments were refurbished as her private rooms, becoming a ‘garden apartment’ to which she could retreat, rather like the apartments she later had at Gödöllő. These rooms consisted of a large salon and most probably the obligatory exercise room. The walls were hung with silk and the furniture upholstered in her favourite shade of lilac. The apartments of the children of

Franz Joseph and Elisabeth were also on the ground floor.

Adjoining the empress’s apartments were the rooms of her eldest daughter Gisela, located at the western end of the south side of the palace, while in 1867 Crown Prince Rudolf was given his own suite of rooms known as the Crown Prince Apartments, which were located beside the Privy Garden on the Meidling side of the palace. This suite included the White-and-Gold Rooms on the south side of the palace which are today used as function rooms. In all these apartments on the ground floor the ceiling stucco decoration from the time of Maria Theresa together with the white and gold-painted wooden panelling and the landscape paintings executed on canvas were largely preserved.

From 1869 to 1880, following the deaths of Franz Joseph’s parents, Archduke Franz Karl and Archduchess Sophie, and in preparation for the impending World’s Fair to be held in Vienna in 1873, work was undertaken on the eighteenth-century Rococo interiors, which were either restored or complemented with Rococo Revival features as an expression of Austrian imperial style. This restoration work affected the two galleries and the rooms in the East Wing, which were to be used for official state functions during the congress and as suites for high-ranking visitors respectively. The walls of these guest rooms were hung either with tapestries from the imperial collection or refurbished with new red silk ‘pineapple damask’ wall-hangings.