The palace chapel at Schönbrunn today still bears witness to the location, spatial structure and architectural articulation of the original palace designed by Johann Bernhard Fischer von Erlach around 1700.

Under Maria Theresa the Palace Chapel was extensively remodelled. This must have been a matter of great importance to the monarch – the empress was a devout Catholic, and in keeping with Habsburg tradition, attendance at divine service was an indispensable part of the daily routine at court.

From 1743 Maria Theresa commissioned leading artists of the day to give the chapel a new and sumptuous interior. The marble high altar with lateral pilasters, finished with a rounded pediment, was probably designed by Nikolaus Pacassi, and is crowned by a gilded sculpture of the Holy Trinity, executed by Franz Kohl, a pupil of Georg Raphael Donner.

The altarpiece depicting the Marriage of Mary and Joseph was commissioned from Paul Troger, one of the most outstanding Baroque artists in Austria. The altar table supports a massive marble tabernacle in the form of a tempietto flanked by two adoring angels, the door of which is embellished with a gilt relief of a pietà.

There are two further altars on each of the two side walls. Depicting the Education of the Virgin Mary and St John of Nepomuk, the paintings are by the Venetian artist Giovanni Battista Pittoni, who worked at many European courts. The two other altars are in the form of framed alcoves, each containing a gilt lead statue representing the Mother of Sorrows and St John the Baptist. Both statues were cast by Franz Kohl.

The painting on the chapel ceiling was executed by Daniel Gran, another leading artist of the Austrian Baroque era. It shows Mary Magdalene surrounded by allegorical representations of the Christian virtues of faith hope and charity.

For details of services and opening hours visit WWW.SCHLOSSKAPELLE.AT. 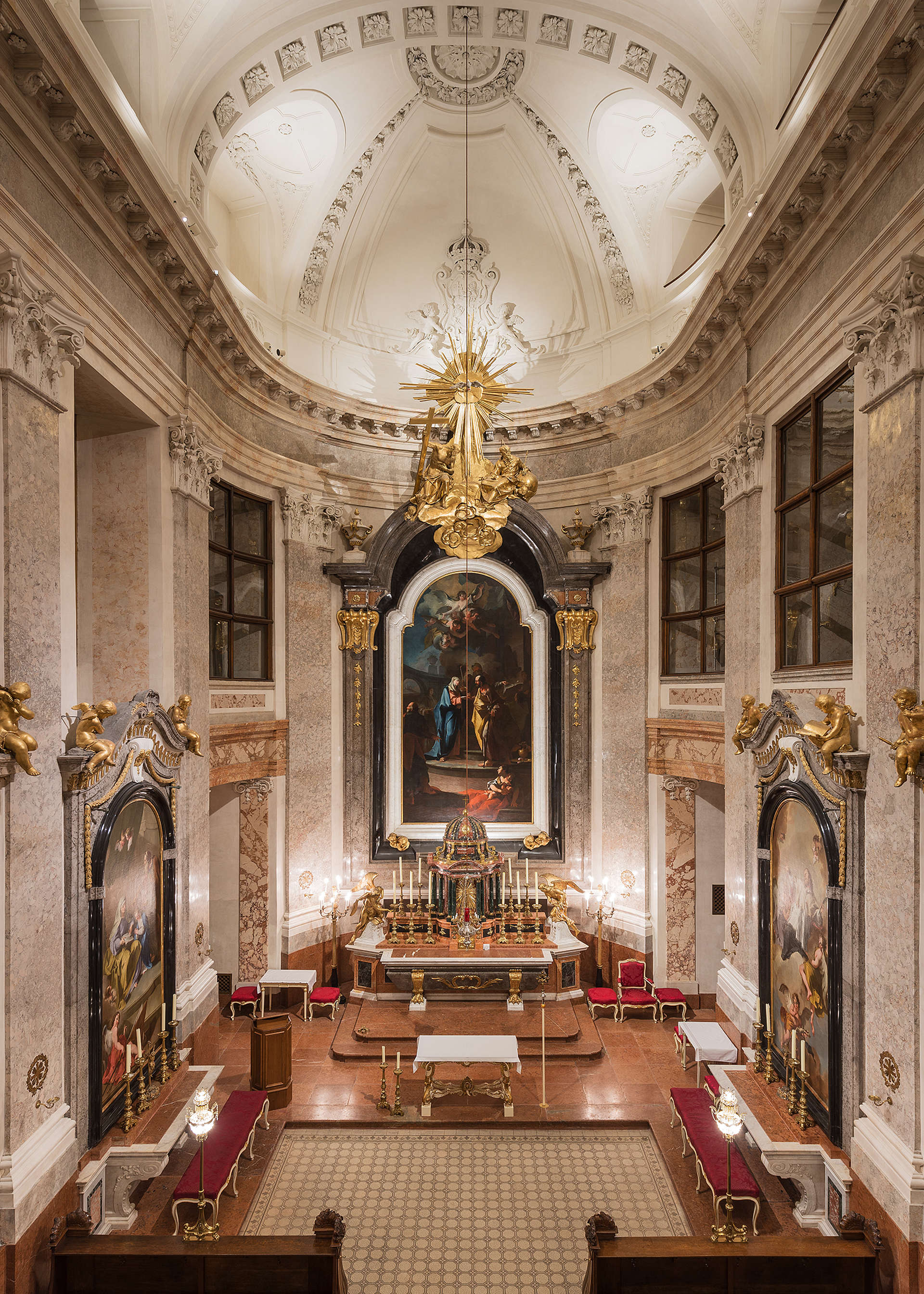 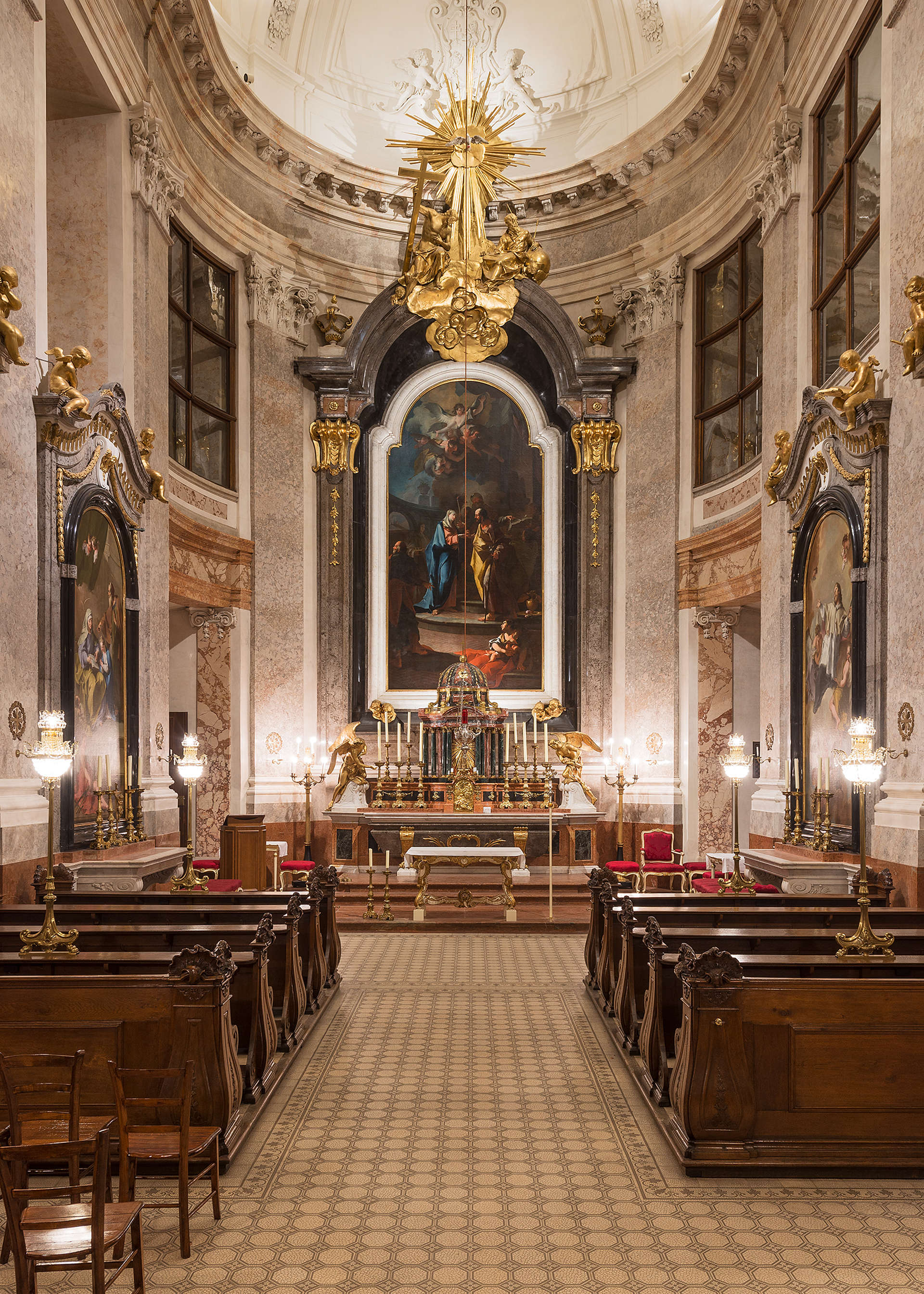 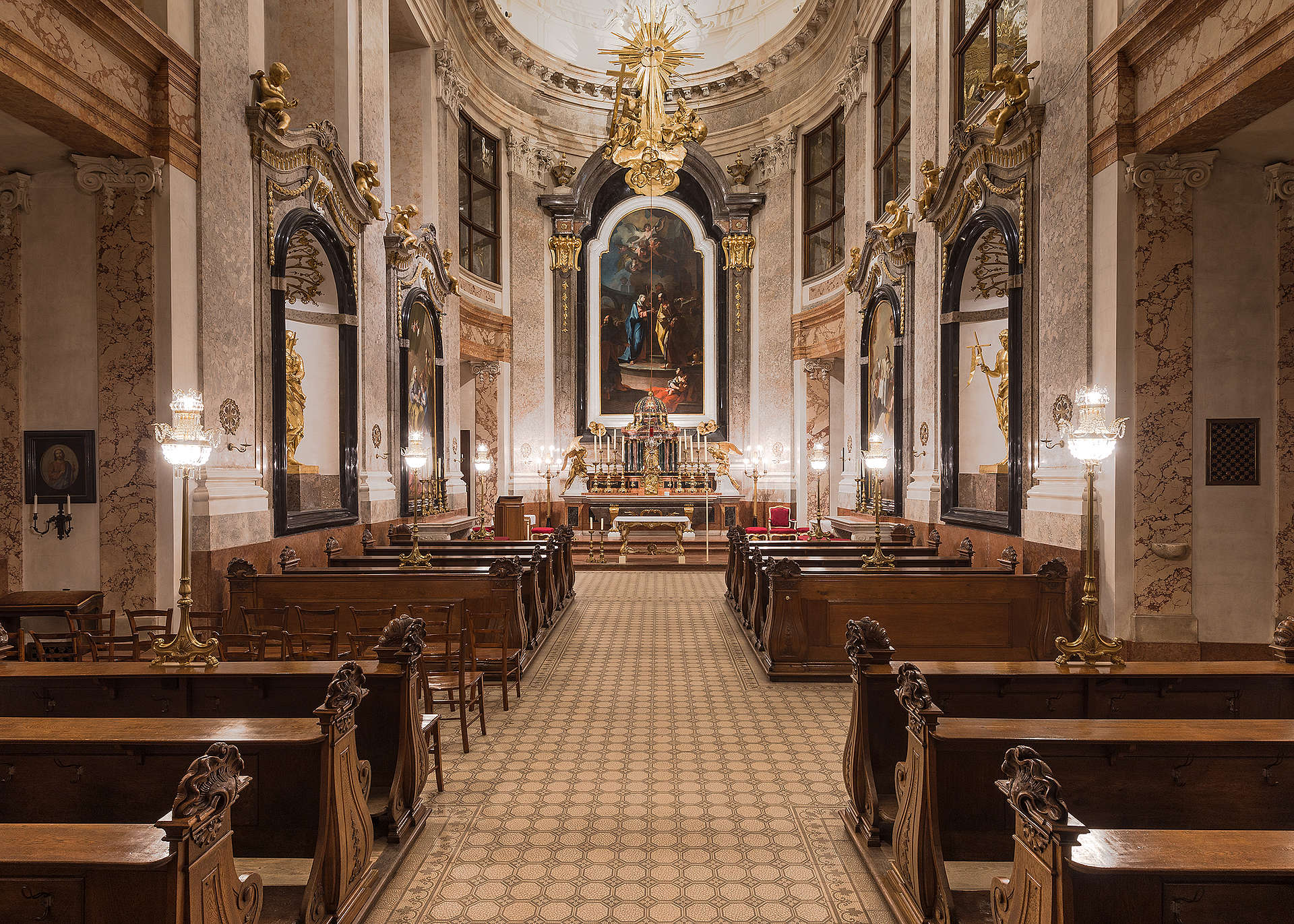 Palace chapel in Schönbrunn Palace. View against the organ loft. 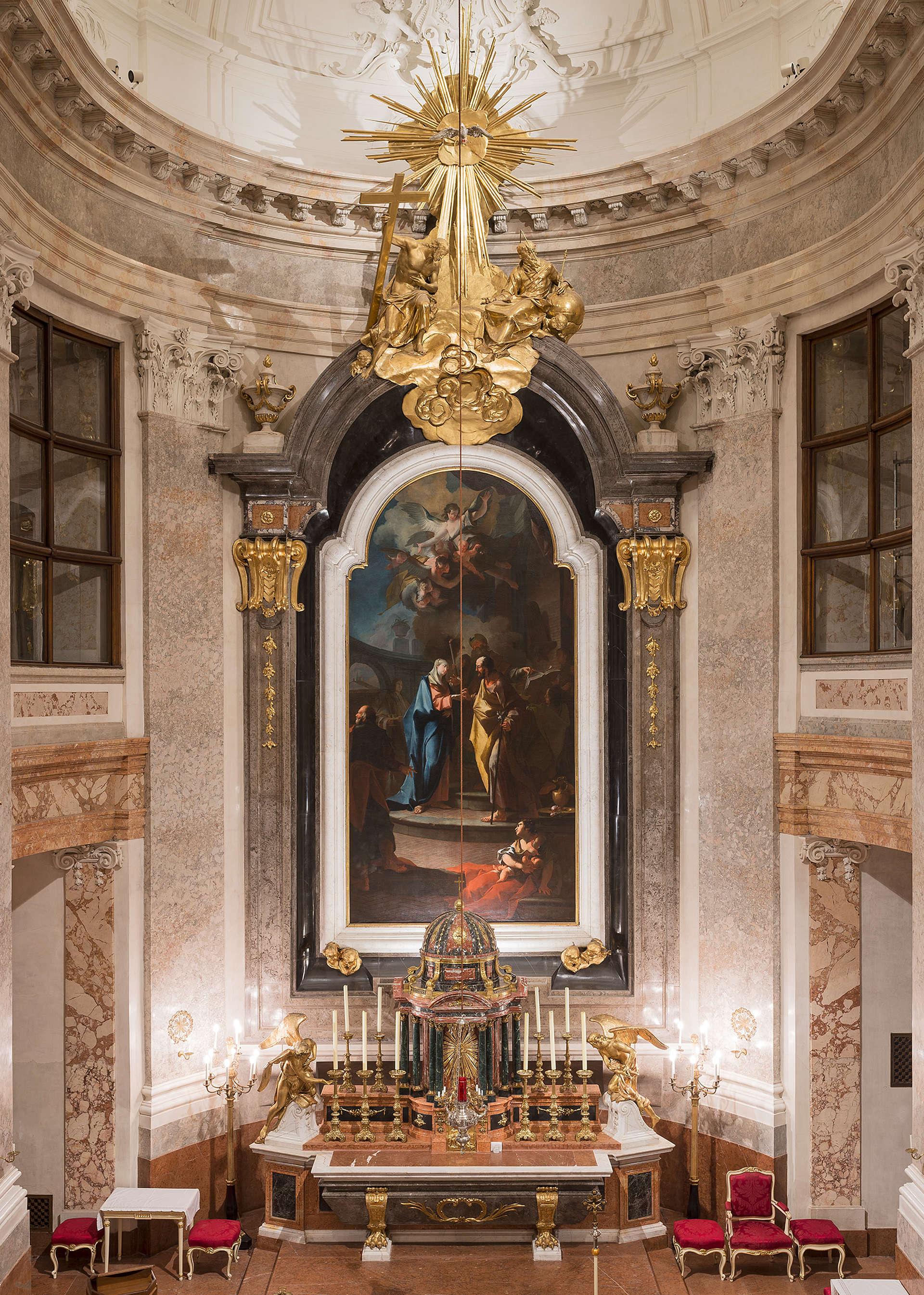 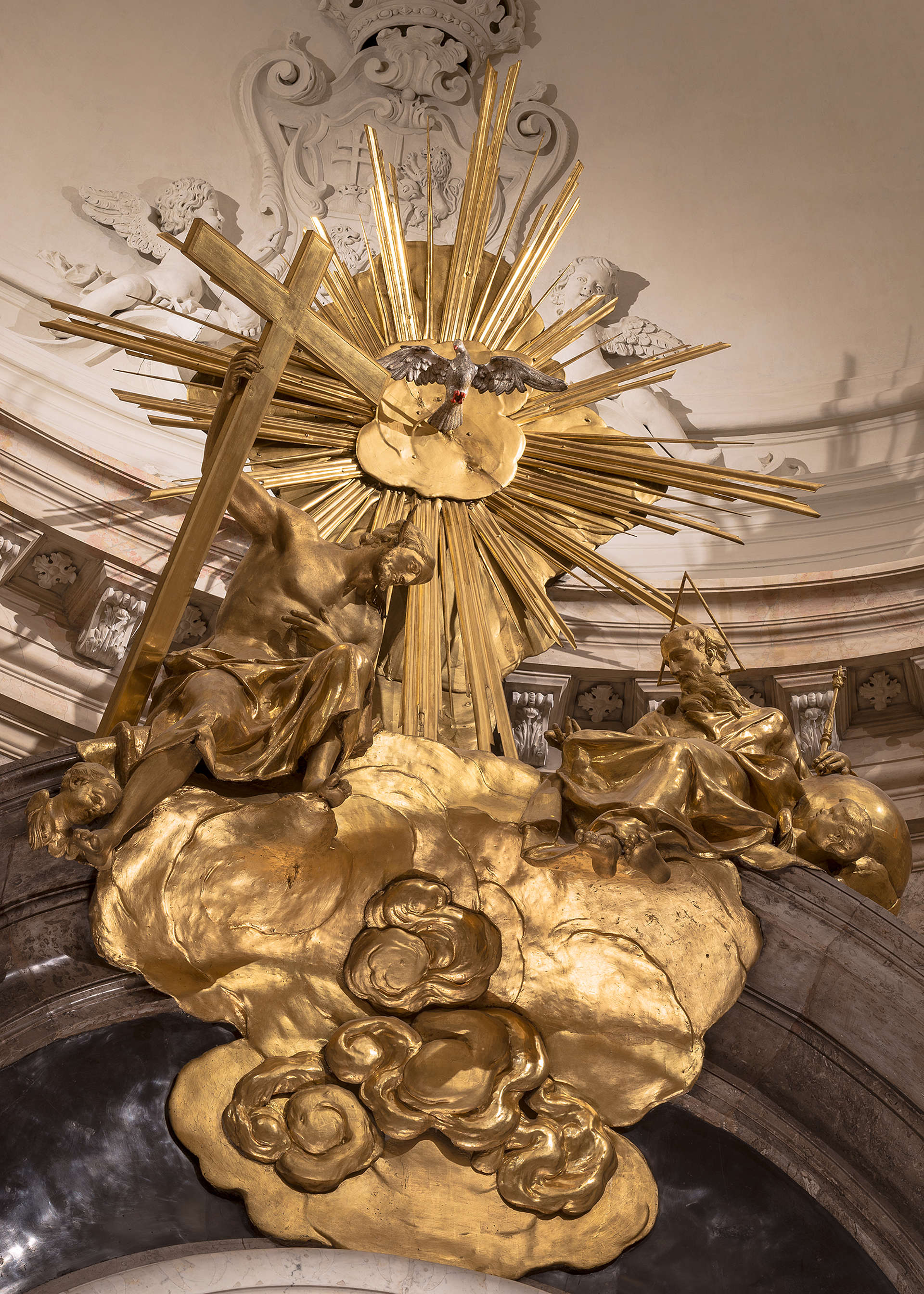 Palace chapel in Schönbrunn Palace, depiction of the Holy Trinity as an attachment crowning the main altar. Palace chapel in Schönbrunn Palace, view against the left side wall. 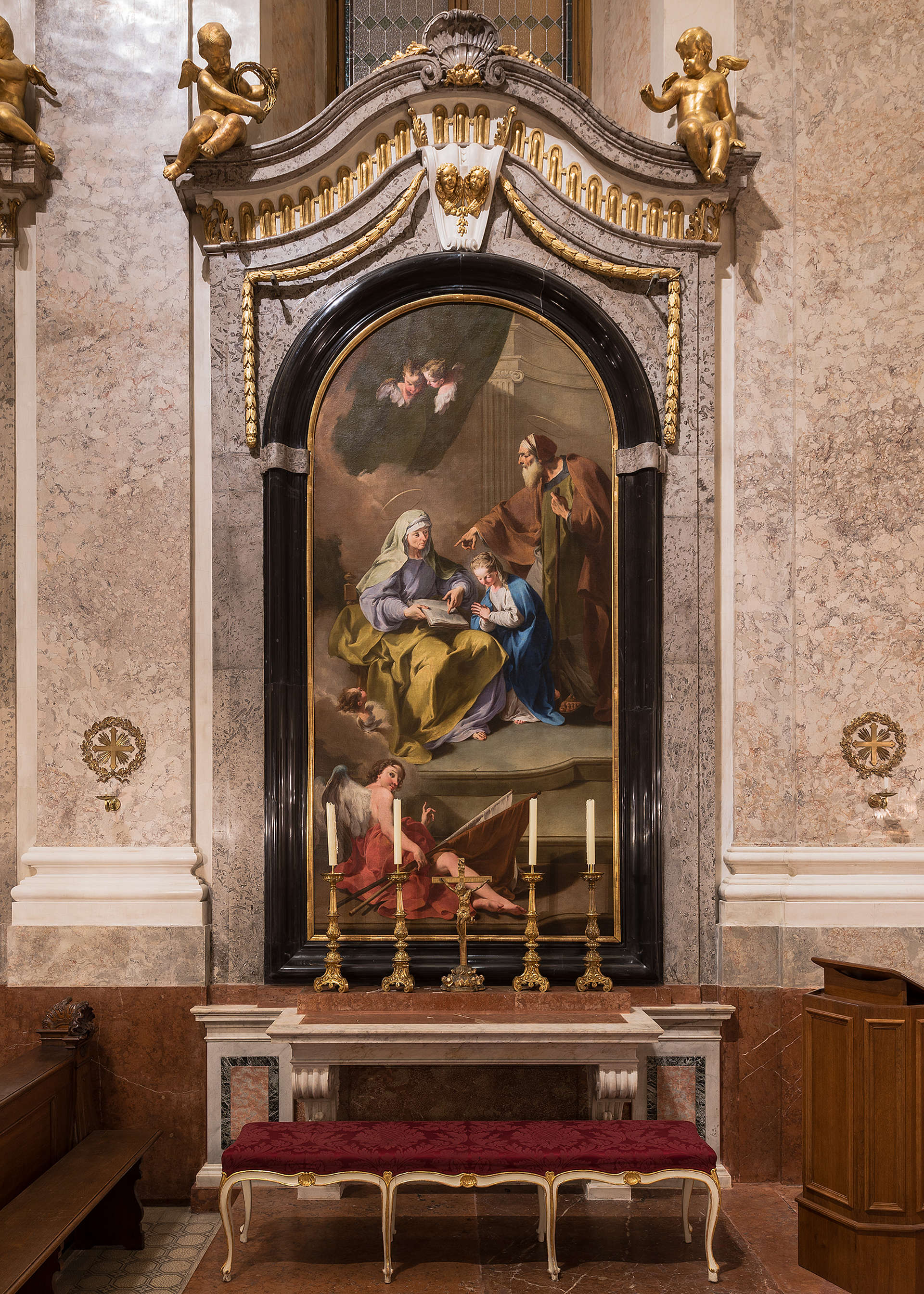 Palace chapel in Schönbrunn Palace, left side altar with painting of Education of Maria by Giovanni Battista Pittoni. Palace chapel in Schönbrunn Palace, view against the right side wall. 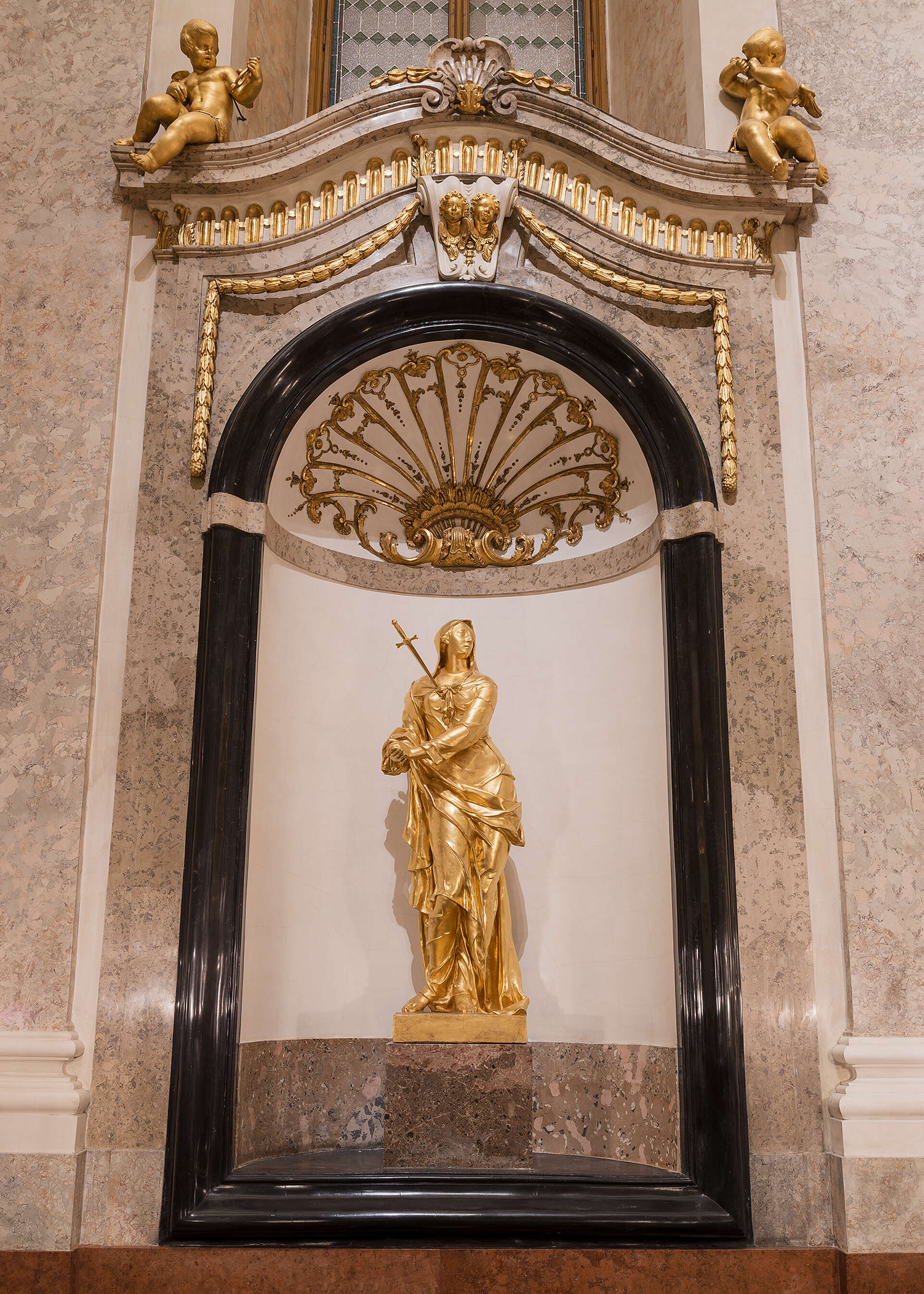 Palace chapel in Schönbrunn Palace, left side wall with statue of the Sorrowful Mother of God by Franz Kohl. Palace chapel in Schönbrunn Palace, right side wall with statue of St. John the Baptist by Franz Kohl.