In terms of its art-historical significance, the Vieux Laque Room is among the most important interiors at Schönbrunn. The black lacquer panels from China lend the room an impression of sumptuous magnificence.

The room originally served as the ‘retirade’ of Franz I Stephan, that is to say, the innermost reception room in the emperor’s apartments. Following his sudden death in 1765 it was rededicated at the behest of Maria Theresa as a memorial room to her beloved husband and acquired its present appearance.

After her husband’s death Maria Theresa only wore mourning dress. Following her own death a note was found in the empress’s prayer book on which she had recorded the precise duration of her happy marriage: ‘29 years, 6 months, 6 days, making 29 years, 335 months, 1,540 weeks, 10,781 days, 258,744 hours’ – a touching personal testimony to the empress’s great love for her husband.

The French name of the room refers to the black and gold lacquer panels. Precious and valuable in equal measure, the interior with its Chinese panels in gold lacquer technique probably derives from a design by the architect Isidor Canevale (Ganneval). Originally produced as screens for the European market, the lacquer panels were cut down and the individual sections set into the richly gilded wainscoting. The restrained contours of the framing decoration already herald the transition from the Rococo to early Classicism.

Maria Theresa also commissioned three paintings for this memorial room: at the centre is a portrait of Franz Stephan, and to its right a double portrait of the couple’s eldest son Joseph and his younger brother Leopold. On the table in front of Joseph, who stands on the right, lies a copy of Montesquieu’s The Spirit of the Laws, one of the most important works of the Enlightenment. Enlightenment thought informed all the young emperor’s endeavours and reforms.

The third painting shows Leopold’s wife Ludovica with the first few of their sixteen children, including the later emperor Franz II (I) as a small child in a violet-coloured gown. The depiction of three generations of the dynasty in this room was intended to demonstrate the continued existence of the House of Habsburg-Lorraine, always a matter of central concern for Maria Theresa. 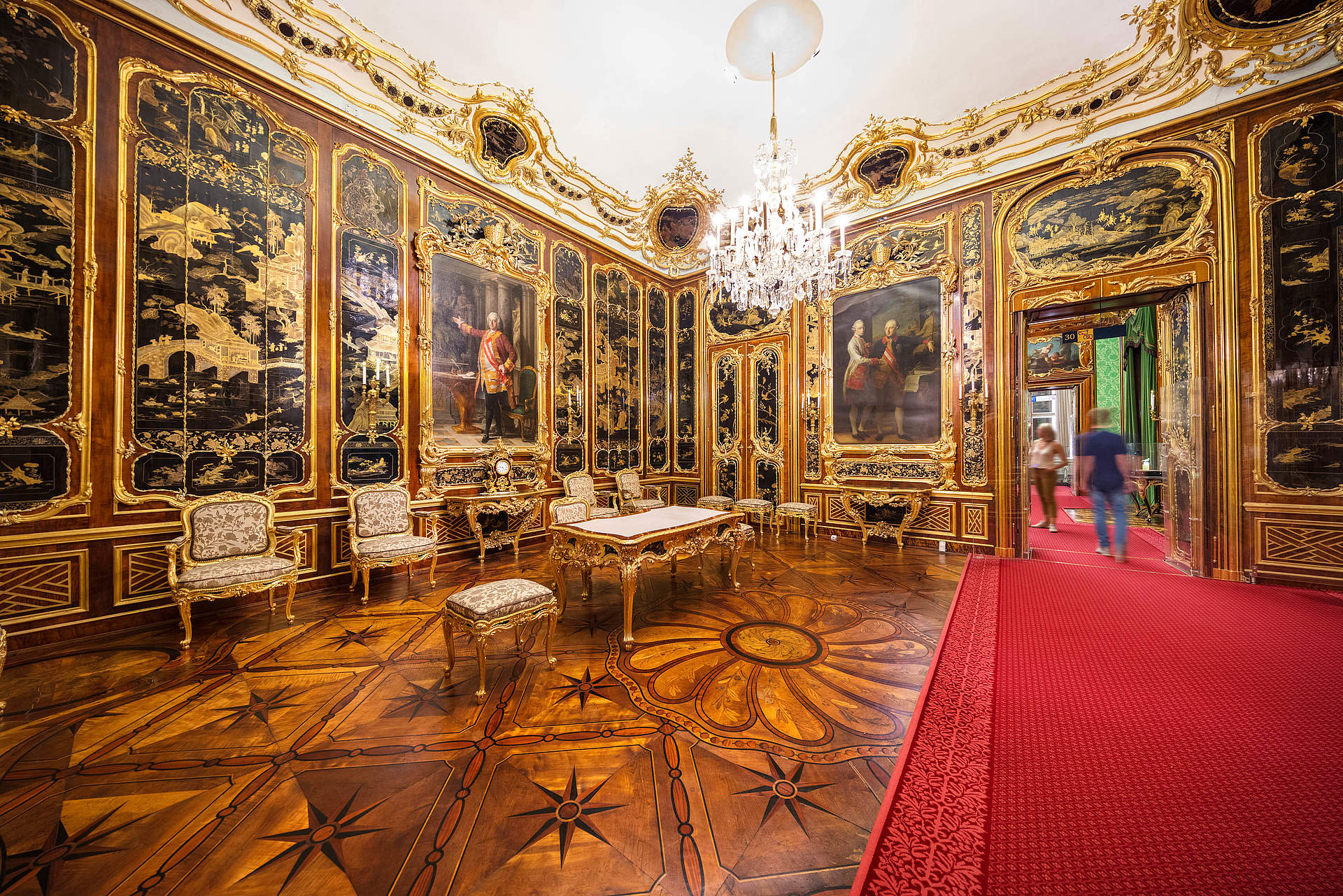 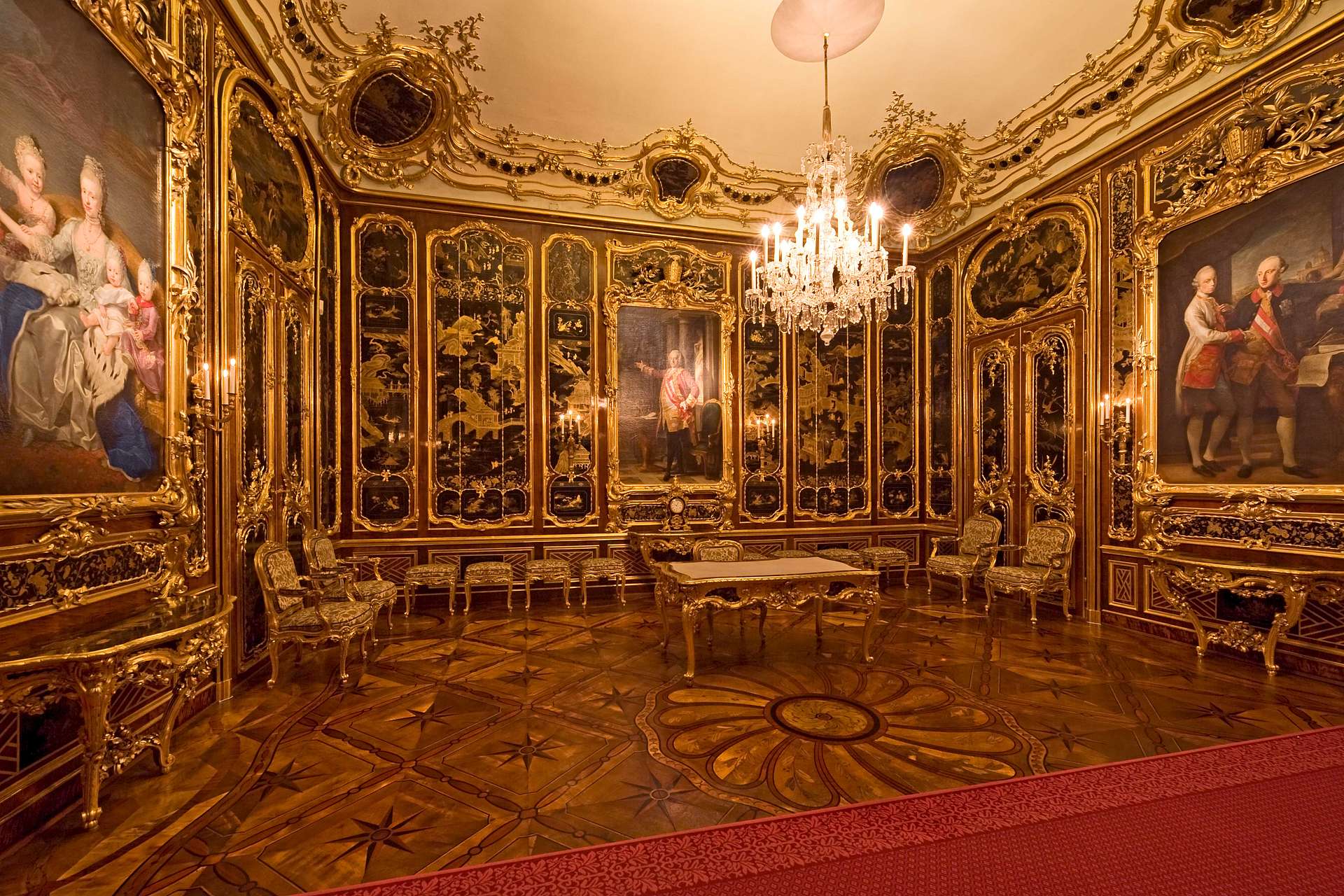 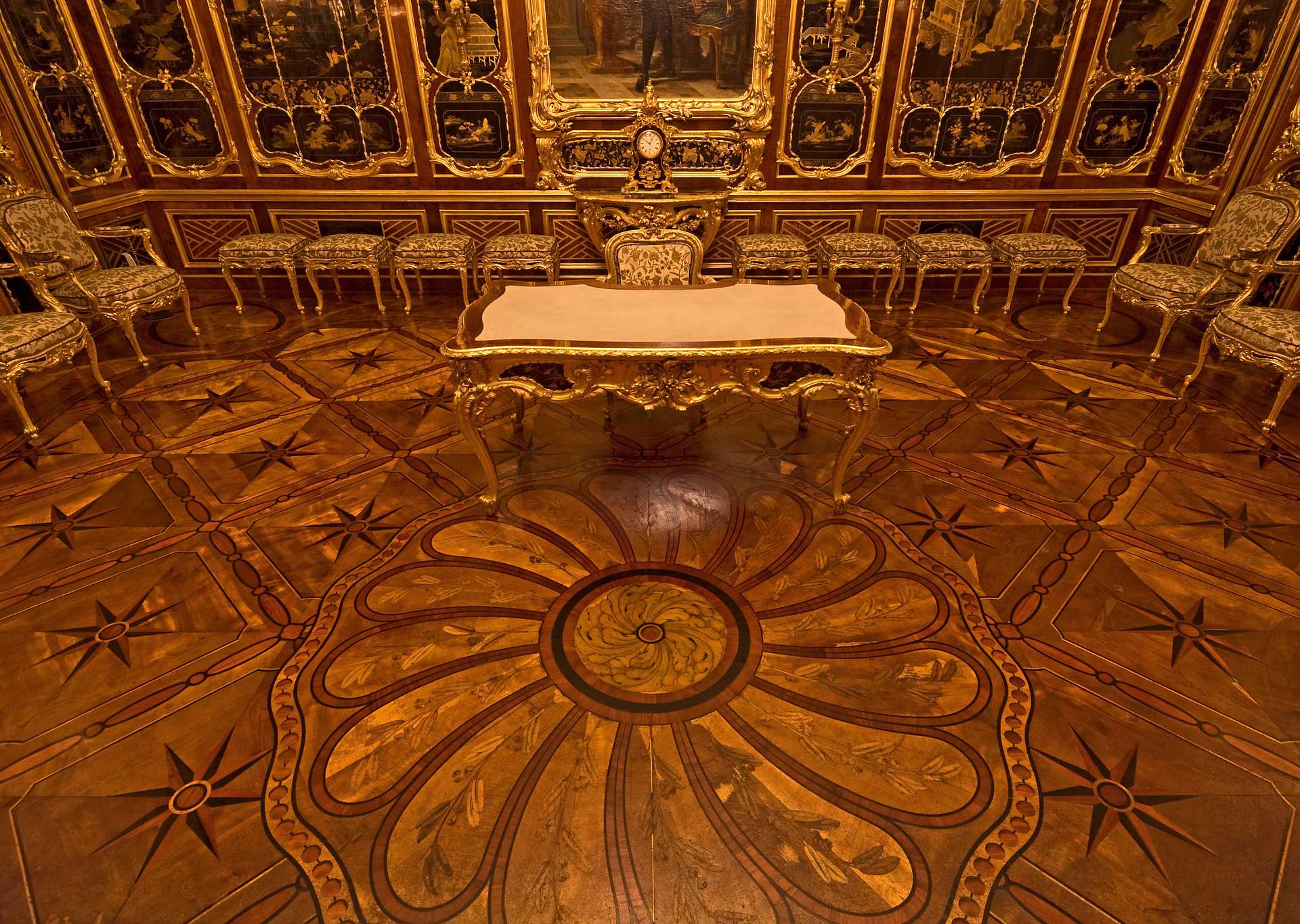 Vieux Laque Room in Schönbrunn Palace, detail of the floor 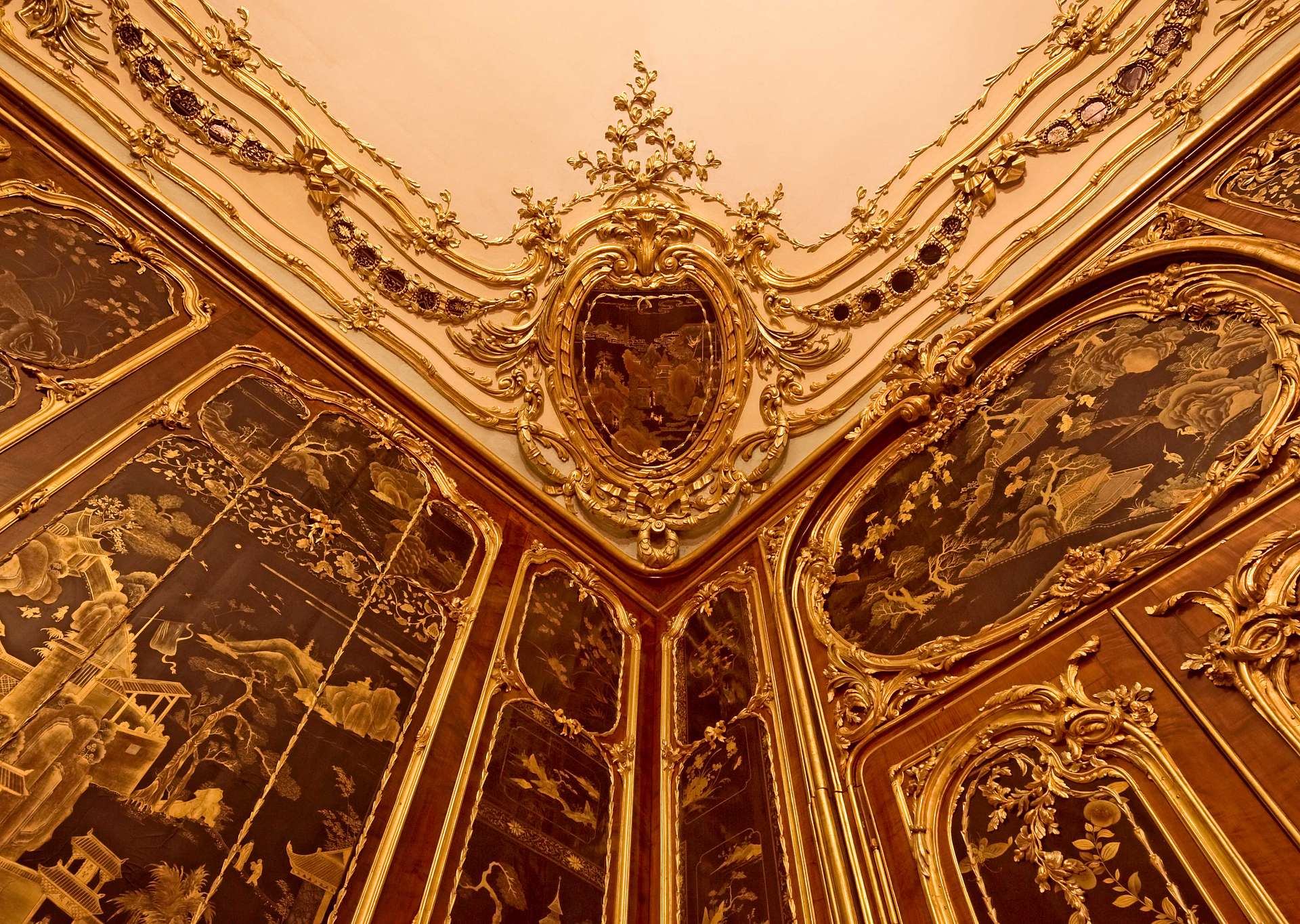 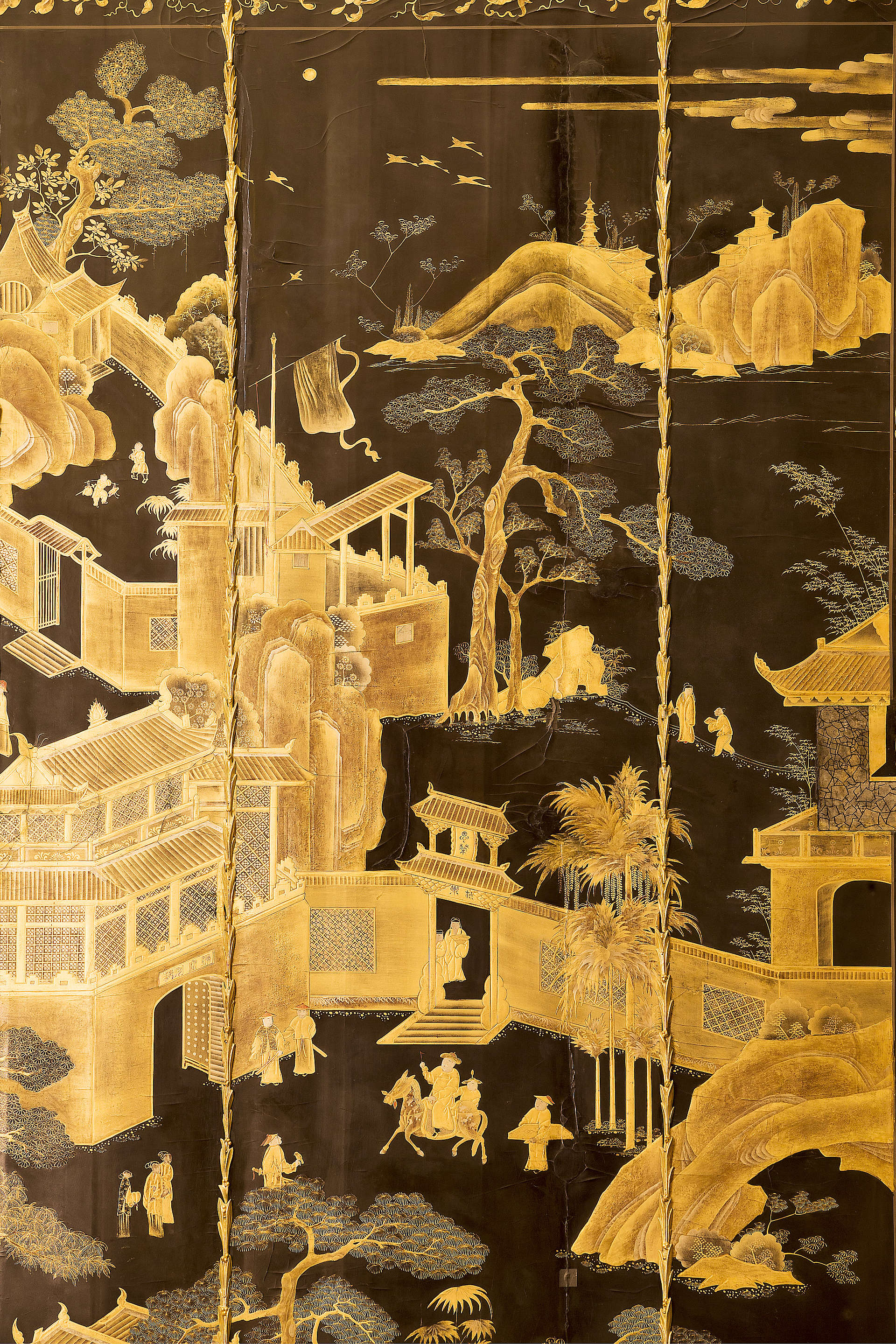 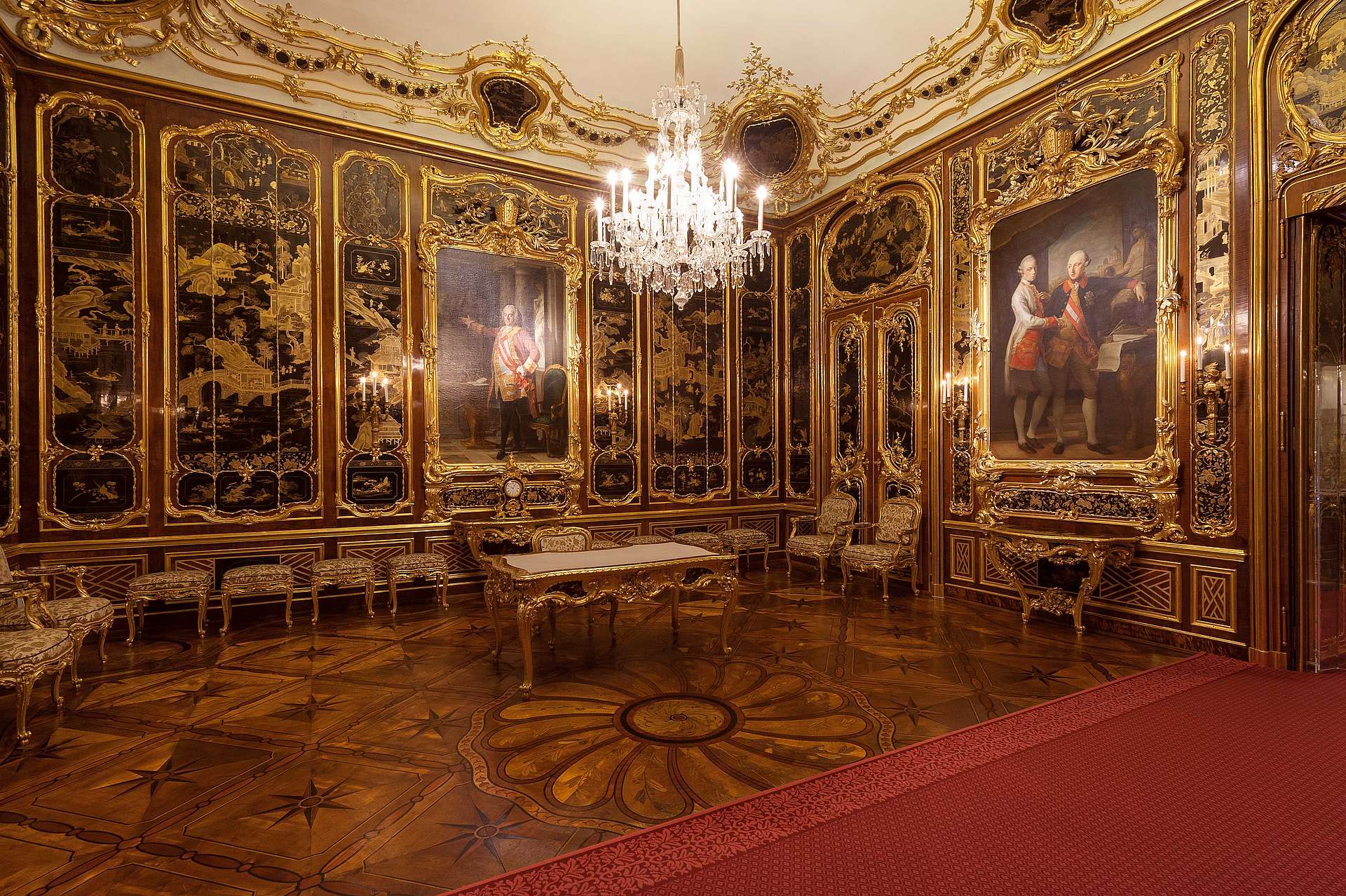 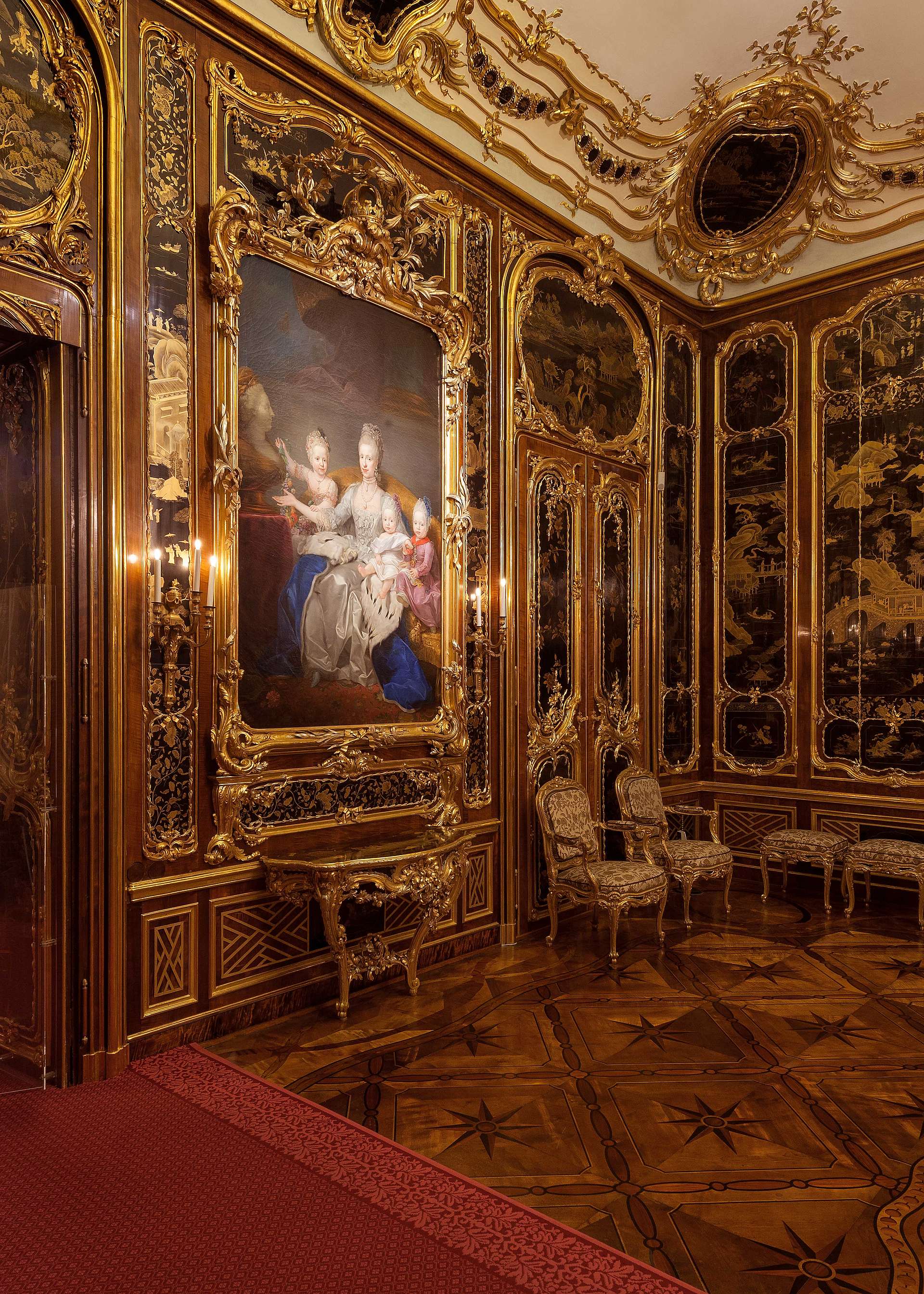 Maria Theresa also commissioned several portraits for the room: the posthumous likeness of her husband by Pompeo Batoni, dated 1769, another by the same artist showing the couple’s sons Joseph and Leopold in Rome, and one by Anton von Maron depicting Maria Ludovika, Leopold’s wife, with three of their children.

Maria Theresa also commissioned several portraits for the room: the posthumous likeness of her husband by Pompeo Batoni, dated 1769, another by the same artist showing the couple’s sons Joseph and Leopold in Rome, and one by Anton von Maron depicting Maria Ludovika, Leopold’s wife, with three of their children.