The history of Schönbrunn and the buildings that preceded it on this site goes back to the Middle Ages. The whole estate had borne the name of ‘Katterburg’ from the beginning of the fourteenth century and belonged to the manor of the monastery at Klosterneuburg. It had a corn-mill together with an arable farm and vineyards, and over the following centuries numerous tenants of this flourishing estate are documented.

In 1569 it passed into imperial possession through Emperor Maximilian II. The Roman-German emperor was mainly interested in laying out pleasure gardens and a game preserve in order to indulge his twin passions for collecting and hunting, the latter a passion which was shared by many other members of the Habsburg dynasty. The gardens created by Maximilian were thus not only intended for the keeping of native game and fowl but also provided space for exotic birds such as peacocks and turkeys, a standard feature in princely gardens of the time.

After the enclosed gardens of the Katterburg were destroyed by Hungarian forces in 1605, the damage was provisionally repaired and the estate was subsequently only used by Emperor Matthias for hunting. According to a legend, it was on one of these hunting excursions in 1612 that Matthias discovered the ‘fair spring’ (schöner Brunnen) that was later to give the estate the name by which it would be known. Matthias’s successor, Ferdinand II and his wife Eleonora of Gonzaga, both passionately

fond of hunting, also used the park for their hunting parties. Following Ferdinand’s death in 1637 it became the empress’s dower residence and a splendid château de plaisance was built, known from then on as Schönbrunn, a name first documented in 1642.

Eleonora of Gonzaga, who had a rare understanding of art, had magnificent formal gardens laid out around the palace which became the setting for frequent court celebrations and festivities. Her niece and successor, another Eleonora of Gonzaga, widow of Emperor Ferdinand III and like her aunt a keen patron of the arts, continued to extend the gardens. In the mid-seventeenth century numerous open-air performances took place in the ‘famose parco di Scheenbrunn’, occasions on which Emperor Leopold I displayed his artistic talents as composer and actor. This glittering lifestyle came to an abrupt end when Vienna was besieged by Ottoman forces in 1683, and the palace and park at Schönbrunn were devastated.

Schönbrunn having come into his possession in 1686, Leopold I decided to give the estate to his son and successor, Joseph, and commissioned a magnificent new palace for the future emperor. Through the mediation of certain members of the nobility, the architect Johann Bernhard Fischer von Erlach, who had received his training in Rome, was invited to submit designs to the imperial court. Having at first produced a set of somewhat utopian designs, von Erlach eventually came up with a practicable design for a large hunting lodge, work on which began in 1696. Four years later it was ready for occupation. However, the lodge was not finally completed before Joseph’s death in 1711 owing to financial difficulties resulting from the War of the Spanish Succession.

Plans for the gardens by Jean Trehet, a pupil of the French garden designer André Le Nôtre, date from as early as 1695. Along the main axis of the building Trehet laid out the central parterre, accentuated by a pool at the intersections of the paths and flanked by lateral boskets (formal plantings of trees and shrubs). Wide avenues articulated the early Baroque gardens, which probably also contained a maze – an almost obligatory feature for gardens of this type and age – as well as a circular orangery garden.

Following Joseph’s death in 1711, the unfinished hunting lodge became the dower residence of Empress Wilhelmine Amalie. In 1728 Emperor Charles VI took over the unfinished lodge but visited it only to shoot pheasant. He is said to have gifted it to his daughter Maria Theresa, who had allegedly always cherished an affection for the palace and its gardens. 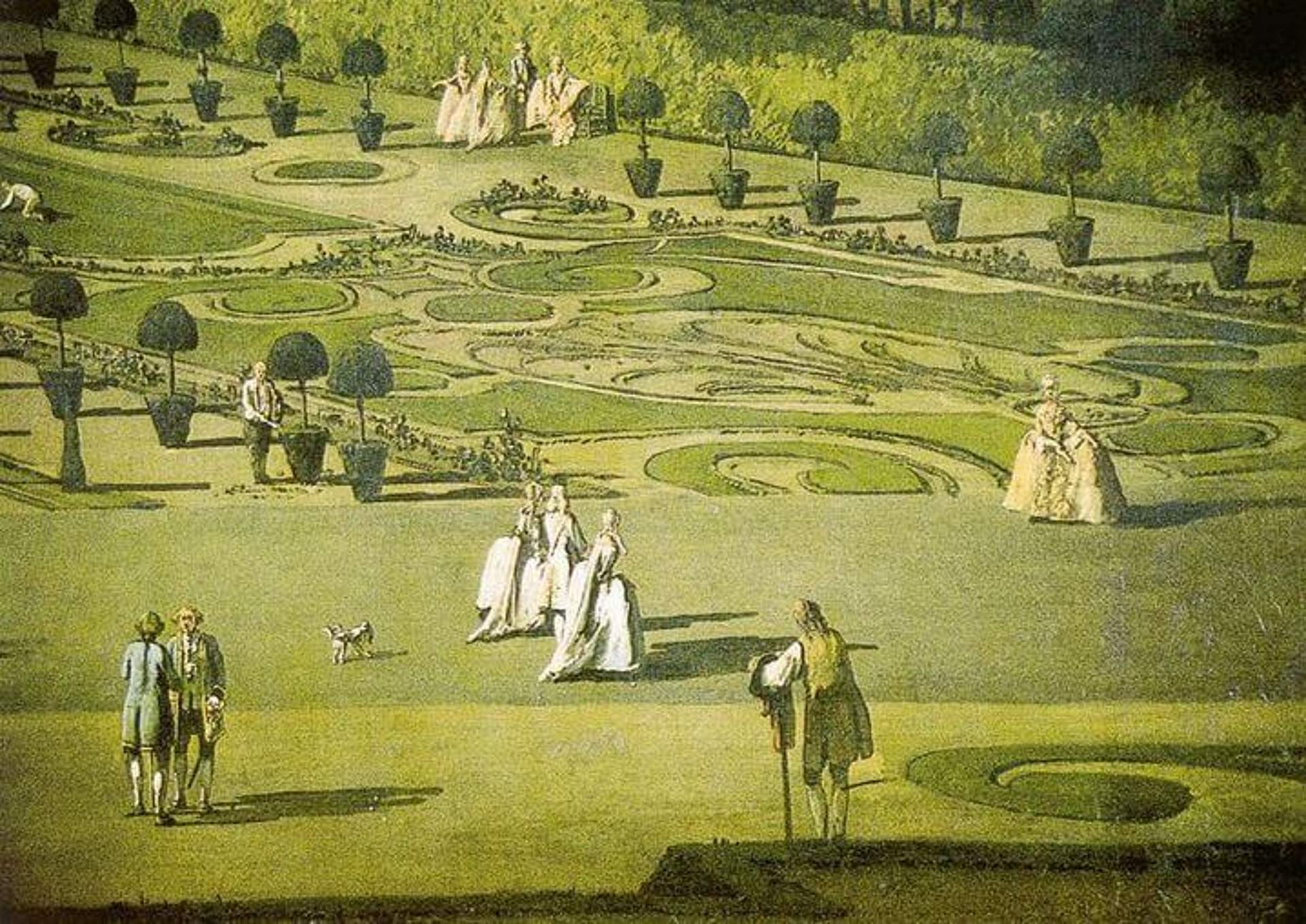